the muse Theme Year: past speakers

Each year, MUSE invites national guests to the University of Utah to keynote the MUSE Theme Year. Click on the photos below for details about our past guests. 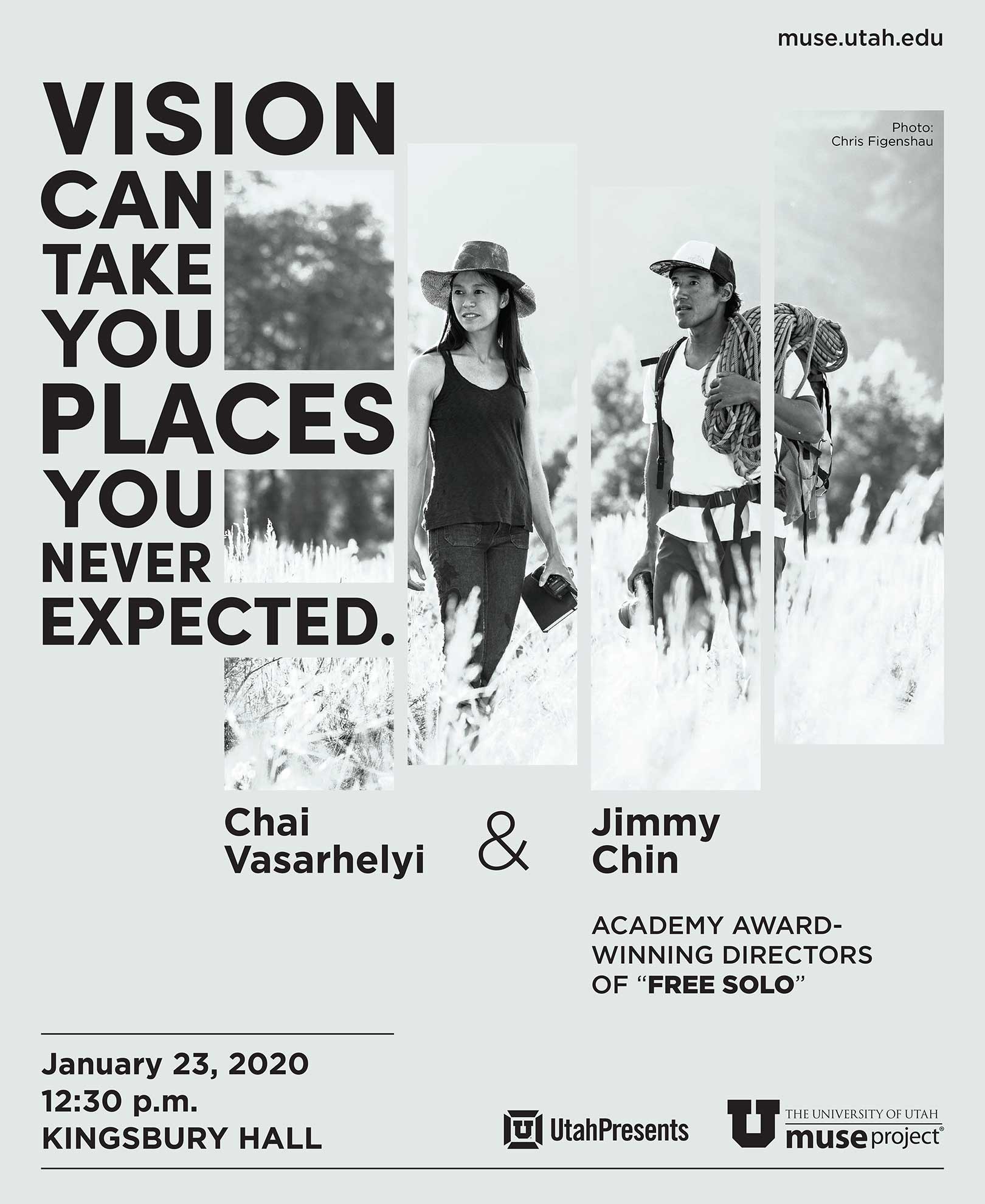 Jimmy Chin is a photographer, filmmaker, and mountain sports athlete known for his ability to capture extraordinary imagery while climbing and skiing in extremely high-risk environments. A longtime member of The North Face Athlete Team, he has joined dozens of exploratory expeditions and completed first ascents around the globe, working with the best adventure athletes in the world. Jimmy’s award-winning photos have appeared on the cover of National Geographic and The New York Times Magazine, among others, and he has directed commercial film projects for a diverse range of clients including Apple, Chase, Pirelli, Red Bull, The North Face, and RSA Films. In 2019, he and Vasarhelyi won an Oscar for their directorial effort of “Free Solo,” which captures Alex Honnold’s historic ropes-free climb of El Capitan in Yosemite National Park. Chin holds a B.A. in Asian studies from Carleton College and currently splits his time between New York City and Jackson Hole.

Chin and Vasarhelyi presented together at the University of Utah on January 23, 2020. 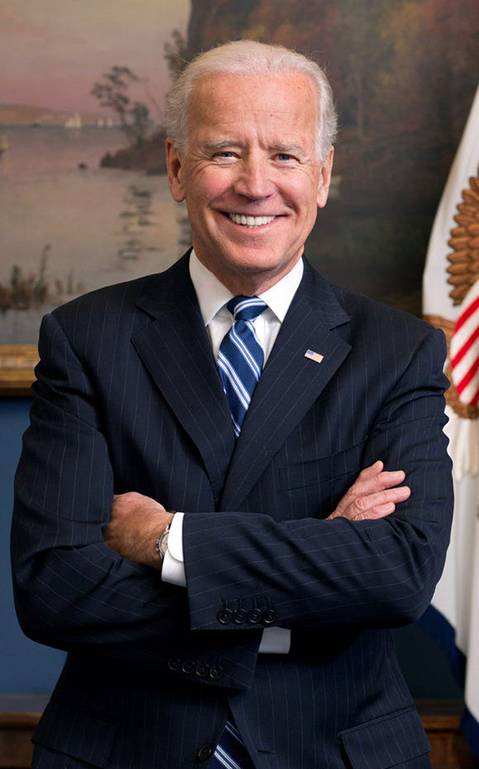 47th Vice President of the United States and author of Promise Me, Dad 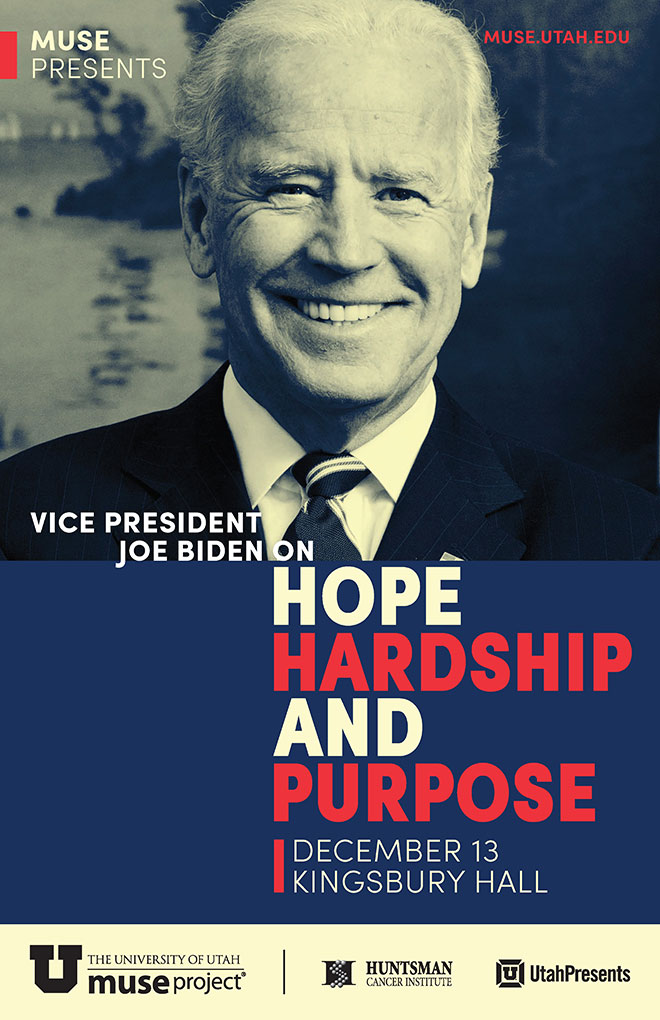 Joseph R. Biden, Jr. represented Delaware for 36 years in the U.S. Senate before becoming the 47th vice president of the United States. He graduated from the University of Delaware and Syracuse Law School and served on the New Castle County Council.

Since leaving the White House in January 2017, Biden has continued his legacy of expanding opportunity for all, both in the United States and abroad, with the creation of the Biden Foundation, the Penn Biden Center for Diplomacy and Global Engagement at the University of Pennsylvania, the Biden Cancer Initiative, and the Biden Institute at the University of Delaware.

In 2017, Biden wrote the memoir Promise Me, Dad: A Year of Hope, Hardship, and Purpose. The book, which was a New York Times No. 1 Bestseller, chronicles the last year of his son Beau’s struggle with a malignant brain tumor that took his life in 2015.

Vice President Biden visited the University of Utah on December 13, 2018. 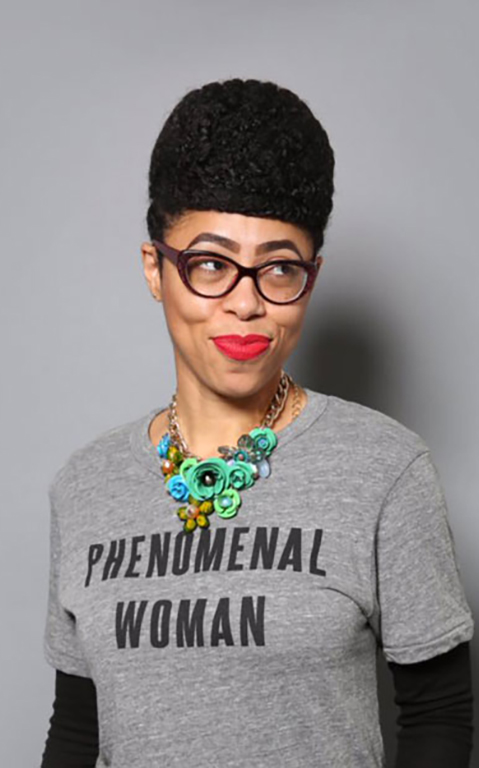 Biomedical scientist and Senior Science Advisor in the Obama Administration 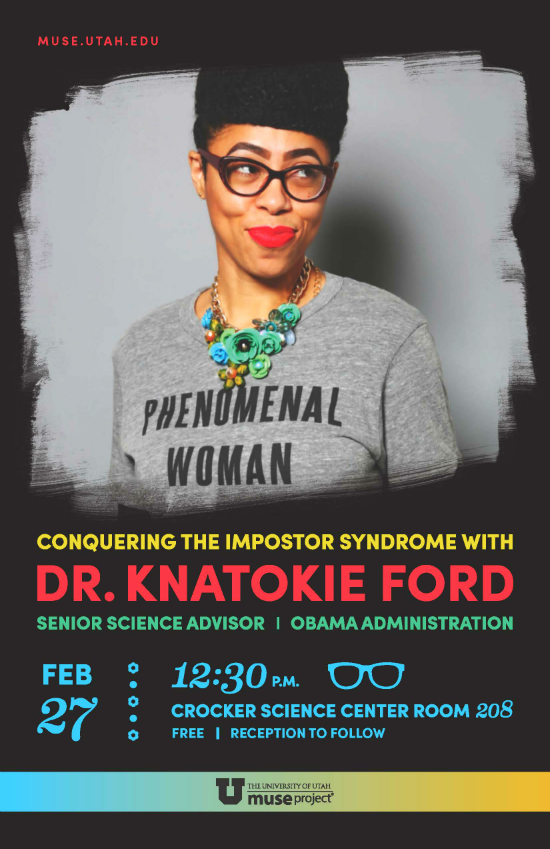 Knatokie Ford, Ph.D., is a dynamic advocate for women in science, technology, engineering and math (STEM). Ford is known for her work confronting the “imposter syndrome,” which produces debilitating self-doubt in many successful people, especially women. Those who suffer from it feel they lack the ability and talent clearly indicated by their achievements. They regard themselves as undeserving when promoted or recognized, and in their professional work they often feel like frauds who will inevitably be “found out” by others.

This experience was Ford’s own, and it led her to leave Harvard University, where she was studying as a doctoral candidate. She later returned to complete her degree in experimental pathology, and she has gone on to serve as a senior science advisor in the Obama Administration and to found an organization called “Fly Sci Enterprise,” which brings “the ‘cool’ and relatable aspects of STEM” to the next generation of innovators, according to its website. Margot Lee Shetterly is the author of Hidden Figures: The American Dream and the Untold Story of the Black Women Mathematicians Who Helped Win the Space Race.

As noted on her website, Shetterly is the 2014 Alfred P. Sloan Foundation Fellow and Virginia Foundation for the Humanities grantee and the founder of "The Human Computer Project," which works to identify the identities of women who worked as computers, mathematicians, scientists and engineers at the National Advisory Committee for Aeronautics (NACA) and NASA from the 1930s through the 1980s.

Shetterly's father worked as an engineer for NASA, and she grew up in Virginia near the facility where the “hidden figures” worked for many years. She is a graduate of the University of Virginia.

Shetterly presented at the University of Utah alongside Dr. Ellen Stofan on March 30, 2018. Dr. Ellen Stofan is a professor and researcher who has served as the John and Adrienne Mars Director of the Smithsonian's National Air and Space Museum since 2018.

Prior to her work at the Smithsonian, Stofan held the position of chief scientist at NASA from 2013 to 2017. In that role, she was the principal advisor to the NASA administrator on the agency’s programs and strategic planning. Stofan has also held senior positions at NASA’s Jet Propulsion Laboratory and New Millennium Program.

Stofan is an honorary professor at University College London, and she is an outspoken champion of young women and people of color who seek careers in STEM. She received a Bachelor of Science degree in geology from the College of William & Mary, and masters and doctorate degrees from Brown University.

Dr. Stofan presented at the University of Utah alongside Margot Lee Shetterly on March 30, 2018. 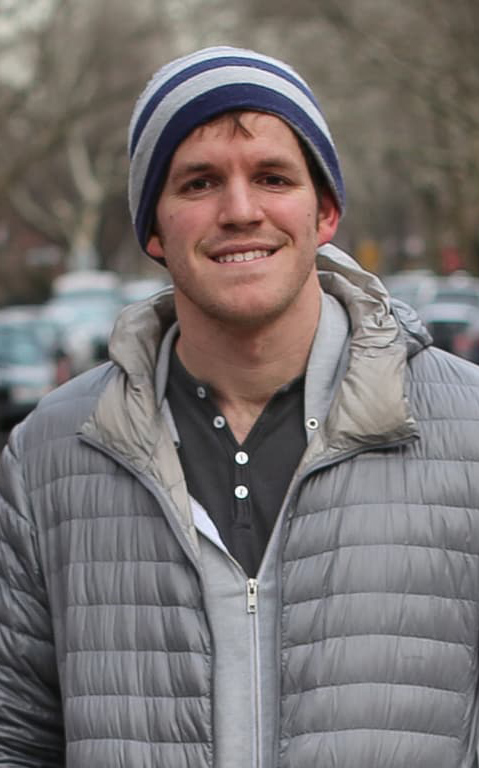 Creator of Humans of New York 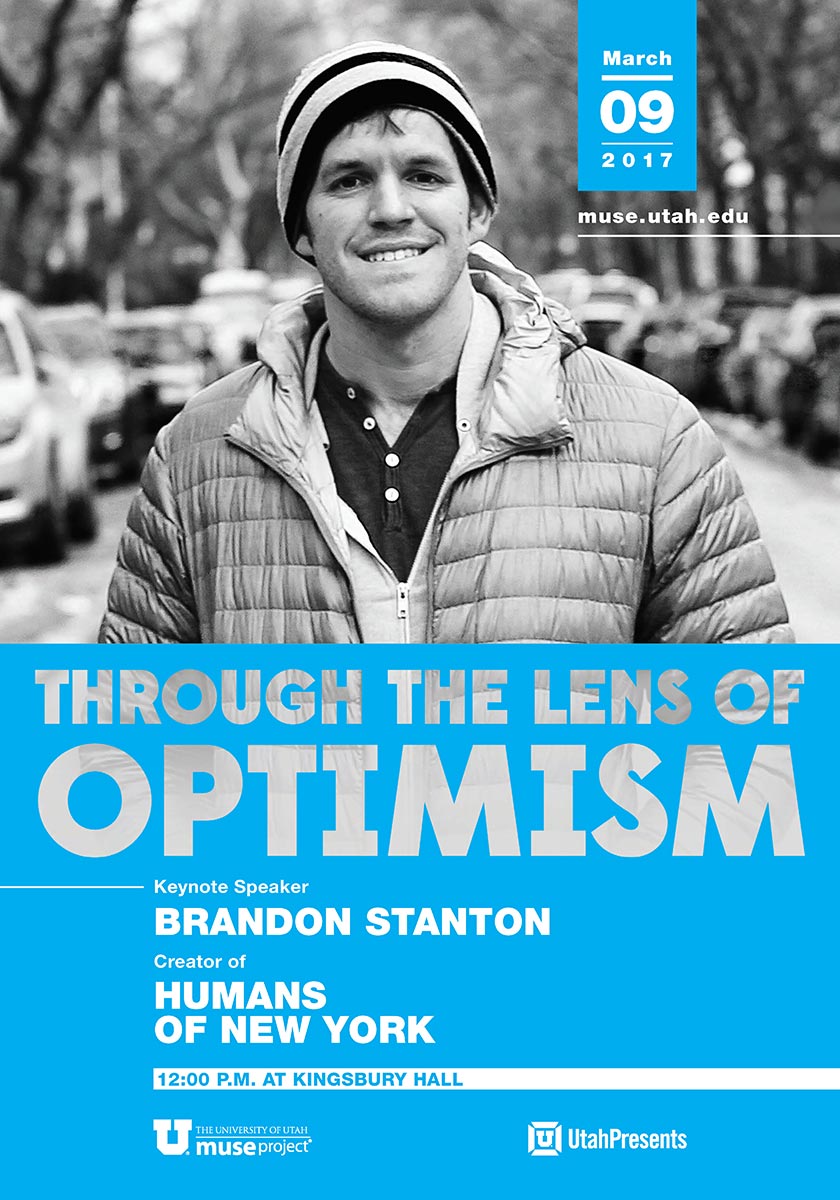 Brandon Stanton is the creator of the Humans of New York (HONY) project, which features portraits and stories of people from the streets of New York. The project has garnered more than 25 million followers on social media, and its material was compiled into Stanton’s 2015 book “Humans of New York: Stories,” a No. 1 New York Times bestseller.

Stanton began Humans of New York with a goal to photograph 10,000 New Yorkers on the street and has expanded it to include stories of people across the globe. Additionally, HONY has successfully raised millions of dollars for individuals and organizations. In 2013, Stanton was included in Time magazine’s “30 People Under 30 Changing the World.” He was an ABC News “Person of the Week” and was invited to photograph former President Barack Obama in the Oval Office.

Stanton visited the University of Utah on March 9, 2017. 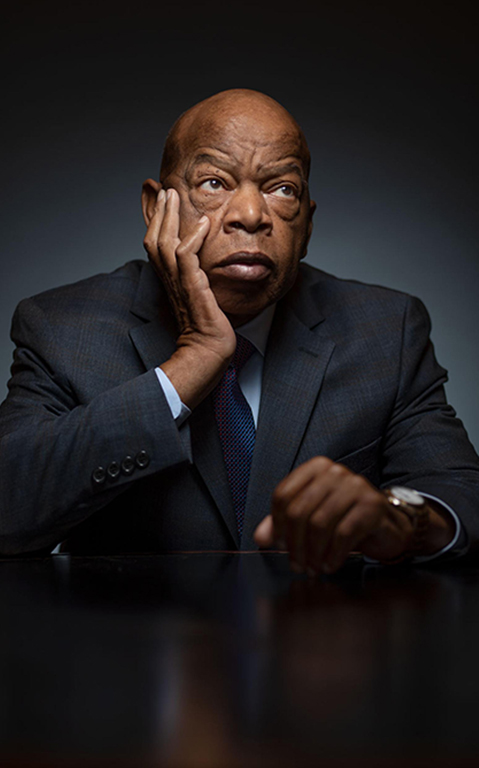 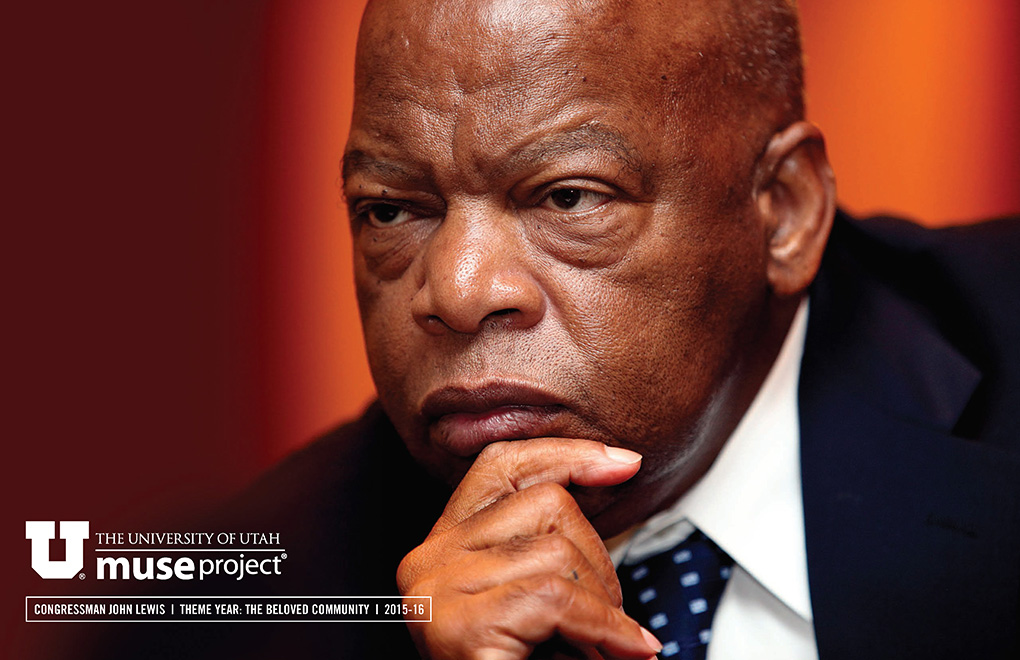 John Lewis was the U.S. Representative for Georgia’s 5th district and an American icon known for his role in the civil rights movement.

He participated in the 1960 Nashville sit-ins and was one of the original Freedom Riders, challenging illegal segregation at bus stations across the South. As chairman of the Student Nonviolent Coordinating Committee (SNCC), he became one of the so-called “Big Six” leaders of the national movement, and was the youngest featured speaker at the 1963 March on Washington for Jobs and Freedom. He then played major roles in the Mississippi Freedom Summer project and the voting rights campaign in Selma, Alabama, culminating in the landmark “Bloody Sunday” March, where police brutality spurred national outrage and hastened passage of the Voting Rights Act of 1965.

Despite physical attacks, serious injuries, and more than 40 arrests, John Lewis remained a devoted advocate of the philosophy of nonviolence. His subsequent career included voter registration activism, service on the Atlanta City Council, and over 25 years in Congress. Lewis was awarded the Medal of Freedom by President Barack Obama in 2011, and was the first recipient of the John F. Kennedy “Profile in Courage” Lifetime Achievement Award.

In 2008, Lewis partnered with his aide Andrew Aydin to write a graphic memoir about his time in the Civil Rights movement. Drawn by artist Nate Powell, the March trilogy occupied the no. 1, 2, and 3 spots on the New York Times Bestseller List, and rapidly entered the curriculum in America's largest school systems and universities. In 2016, March broke several records, becoming the first graphic novel ever to win the National Book Award and receiving four of the American Library Association’s major awards for youth literature, more than any book in history. The words and images of March bring to life the story of John Lewis, the courage of young people, and the power of nonviolence—making them accessible and urgently relevant to new generations.

Congressman Lewis, along with Andrew Aydin and Nate Powell, visited the University of Utah on November 10, 2015. U.S. Supreme Court Justice and author of My Beloved World 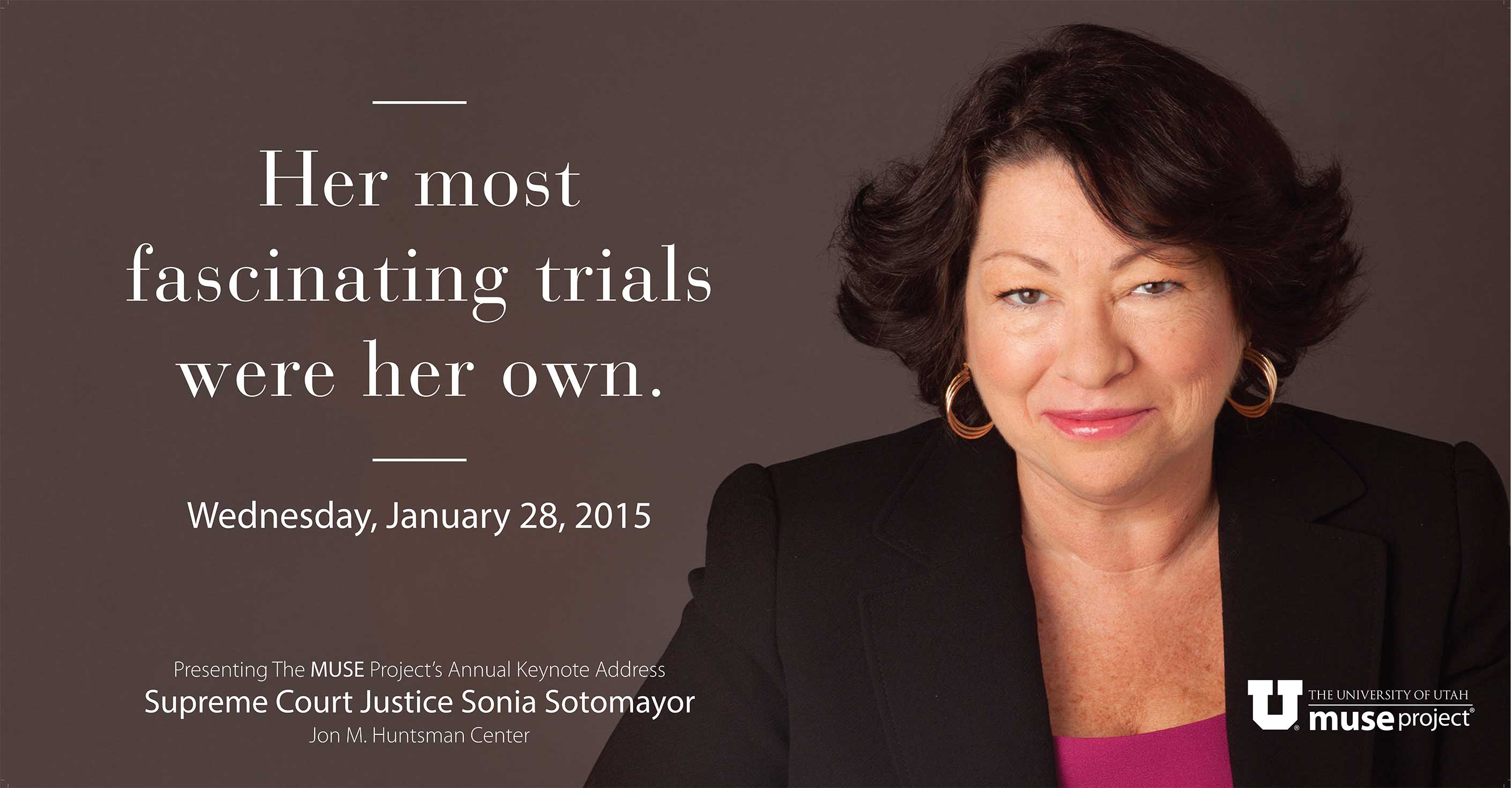 Sonia Sotomayor grew up the older of two children of parents who moved from Puerto Ricoto to the Bronx before she was born. She was diagnosed with Type 1 diabetes as a child, and her father passed away when she was nine.

In 2014, Sotomayor wrote the best-selling memoir My Beloved World, a deeply personal account of her upbringing in the Bronx, her educational path, and her professional life until 1992.

Justice Sotomayor visited the University of Utah on January 28, 2015. Entrepreneur, combat veteran, and author of The Other Wes Moore 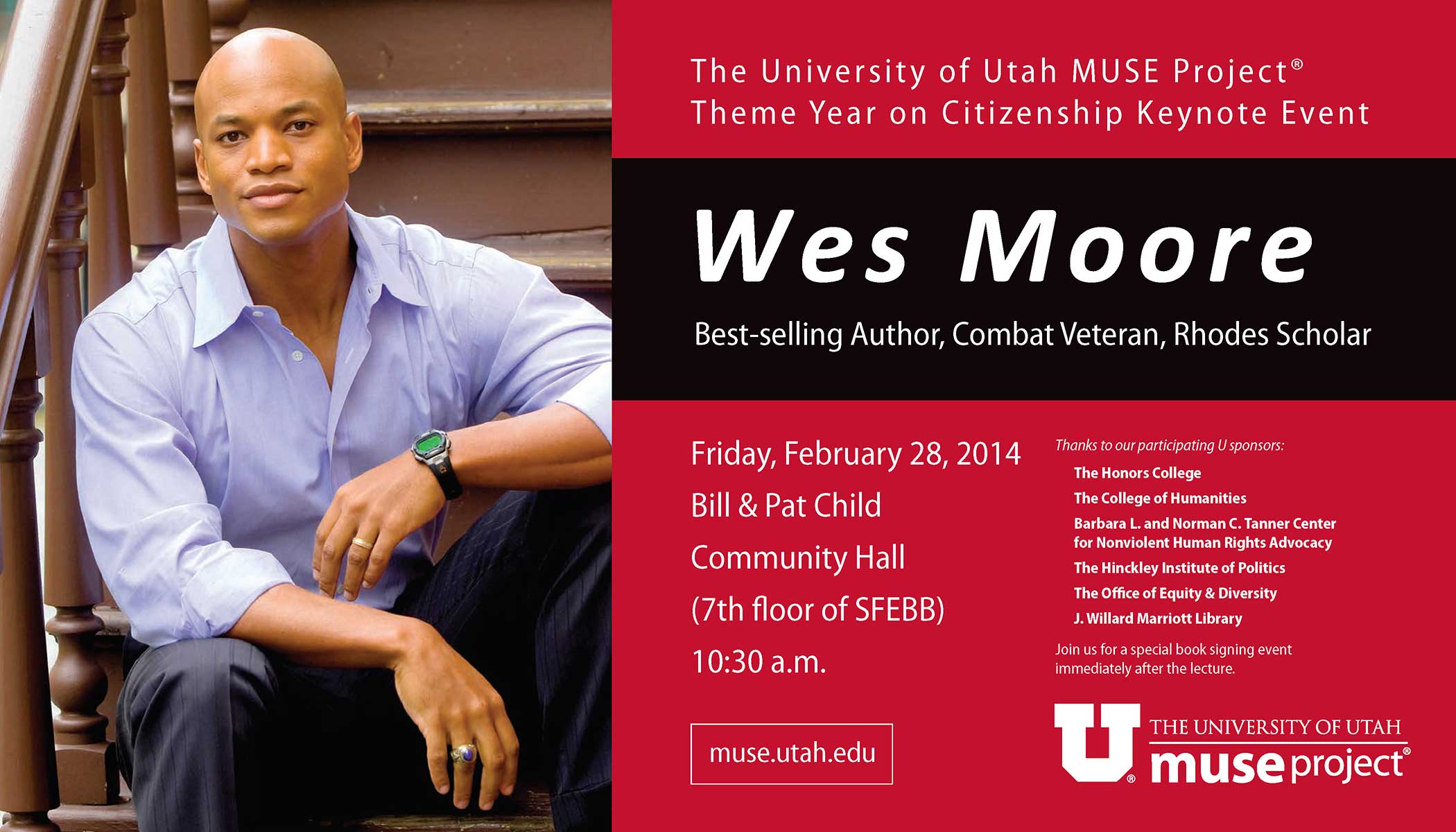 Wes Moore is the CEO of Robin Hood, one of the largest anti-poverty forces in the nation. He is a bestselling author, a combat veteran, and a social entrepreneur.

Moore's first book, “The Other Wes Moore,” a perennial New York Times bestseller, captured the nation’s attention on the fine line between success and failure in our communities and in ourselves. He is also the author of the bestselling books “The Work,” “Discovering Wes Moore,” and “This Way Home.”

Moore graduated Phi Theta Kappa from Valley Forge Military College in 1998 and Phi Beta Kappa from Johns Hopkins University in 2001. He earned an MLitt in International Relations from Oxford University as a Rhodes Scholar in 2004. Moore then served as a captain and paratrooper with the U.S. Army’s 82nd Airborne, including a combat deployment to Afghanistan. He later served as a White House Fellow to Secretary of State Condoleezza Rice.

Before becoming CEO at Robin Hood, Moore was the founder and CEO at BridgeEdU, an innovative tech platform addressing the college completion and job placement crisis. BridgeEdU reinvents freshman year for underserved students. Moore remains chairman of the board of directors at BridgeEDU. He has also worked in finance as an investment banker with Deutsche Bank in London and with Citigroup in New York.

Moore visited the University of Utah on February 28, 2014.